Skip to content
AccueilNouvellesCompassionate communityA Donor with a Big Heart

A Donor with a Big Heart 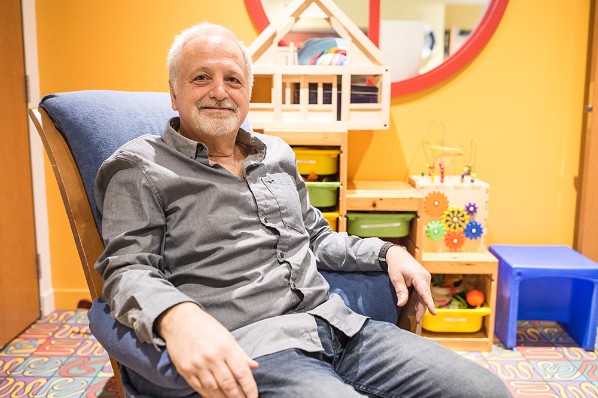 Michel Poirier was making a detour on his bicycle when he discovered the Lighthouse. Under the trees of Saint-Helen Island, with the backdrop of downtown Montreal, Michel listened to his good friend Robert Chagnon passionately talk about his beloved Michèle Viau-Chagnon and her friend Nicole Marcil-Gratton’s accomplished work that made the Lighthouse possible.

Having lived a difficult childhood, Michel was touched by his friend’s story. He was significantly affected and moved by the organization’s mission. Strongly believing that childhood is a neuralgic step of human life, Michel became upset when he realized that some children will never go beyond childhood as a stage of life. Since then Michel undertook a strong lasting commitment towards The Lighthouse.

For nearly a decade he has been participating in fundraising activities and events for The Lighthouse. He knows just how valuable The Lighthouse is in the lives of seriously ill children and their families.

Michel was recently troubled by an advertisement showing that some people wished, at the time of their cremation, to use their ashes to grow trees. With the idea of returning to our roots and what legacy we leave at the end of our lives, Michel began to wonder how he could do more for the people he would leave behind after his death. Michel considers that his legacy giving decision is highlighted with a social dimension, form of kindness, and a deep desire to take care of others and beautify the lives of those who have suffered.

In preparing his will and last wishes, he included a legacy giving to The Lighthouse. He has great faith in the organization and its mission, and strongly believed that that the money would be spent in the best interests of the children and their families. The reason is that there is scrupulously oversight over the Lighthouse’s administrate fees and they are constantly maintained as low as possible.

Michel’s message to others is that legacy giving is not only reserved for wealthy people. Any gift, regardless of the amount, is important to The Lighthouse and brings hope to children and families. As he points out, our goods and possessions will not follow us into the afterlife, so Michel urges all who share his love of The Lighthouse to consider how they can also leave a legacy.

Michel compares life adventure to a sandglass that trickles slowly. Some, like him, would have had the chance to enjoy a big sandglass, filled with a joyful and fulfilled life. Others, like the children at The Lighthouse, only have a small sandglass, full of painful and suffering grains. Legacy giving acknowledges the act of giving and receiving by soothing an unescapable departure and the knowledge that this gift will contribute to the longevity of The Lighthouse. Its survival depends partially on the generosity of the population and the people, such as Michel Poirier, who fundamentally believes in its mission.

Michel Poirier’s inspiring gesture, wise words, and altruistic view of the world that surrounds him confirm, without a doubt, his undeniable status as a big-hearted donor.

Follow Lighthouse to stay informed and catch up on the kids.